During my 5k walk benefitting two local food shelves on Thanksgiving morning, I looked up and let the fat snowflakes hit my face.  It was a soft snow with little breeze, and in an instant I felt thankful. 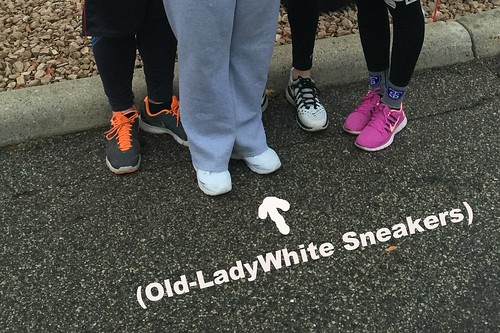 I was feeling my age upon waking that morning.  The bones creaked and the muscles were rigid.  I poked my head out of bed a few times before I left, testing the layers I’d chosen, finally settling on the long-sleeve cotton shirt we received with our race packets, my food bank hoodie, and a pair of grey sweatpants.  I laced up my old-lady white sneakers, and loaded the shelf-stable groceries in the back of my son’s vehicle.

This year marks our second annual Thanksgiving walk/run for hunger.  Last year the thermometer read a daunting one degree Fahrenheit.  I learned a few things about the 5k/10k races, specifically involving winter weather.  As a runner’s sweat drips down his or her back, stalactites form on the seat of the pants, forming —  for lack of a better term —  butt-cicles.  It’s true.  My son’s facial hair froze into a grampa-white beard and mixed with the evidence of his mile-5 nosebleed.  He was terrifying despite the smile on his face.  Although these are not the reasons I don’t run, they definitely justify my rationale.

Today was about thirty degrees warmer than last year, but the snow lent a sense of adventure.  About 15 minutes after we saw my son off on his 10k run, the rest of us lined up for the 5k.  Once the runners had all passed, the dog-walkers, strollers, and I settled into a brisk, yet slower, pace.  My joints had stiffened standing in the cold, and they ached as I began.  I snapped a few pictures, found some good classic rock on Pandora, and firmly secured my earbuds. 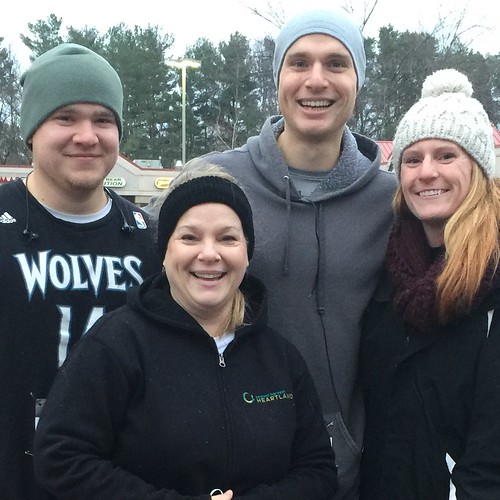 Somewhere in the middle, I looked up into the swirling white, and I felt thankful.  And I thought about that word — Thanksgiving.  Giving thanks.  Certainly I am thankful to the people who organized the race, and to the food shelves who will put the proceeds to good use, and to my body for being able to carry me a whopping three miles on a frosty morn, and to my employer who gives me Thanksgiving off — even thankful to the earth for the crisp air and swirling snow. 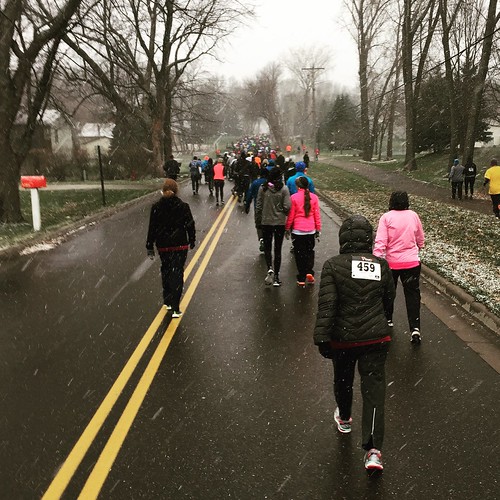 But there is more to it than thanks.  There’s giving.  In the end it doesn’t matter who or how you thank.  Whether you offer up prayer, or thank the cook, or tip the waitress.  Thanking is polite.  Giving takes more.  Here, as I looked before and behind me, were all these people who took time away from their kitchen, or got up early, or scheduled Thanksgiving dinner just an hour later, so that they could give of themselves.

And after all the participants have gone home, or finished their Bloody Marys (just sayin’), there are people who are cleaning and clearing the route of signage or trash, sorting and storing the collected food, packing the race gear away, and accounting for expenses and proceeds.

So while I’m thankful to all the people who provided a way for me to give last Thursday, I’d like to change my definition of Thanksgiving from a day to give thanks, to a day to be thankful for the opportunity to give.  I don’t give as much or as often as I could.  But while my body is able, to participate in this annual event seems like a perfectly splendid way kick off this season of giving. 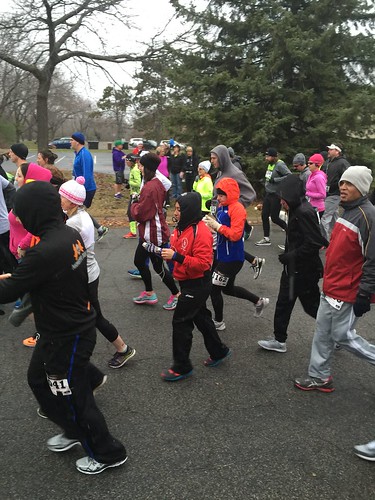