September brings another year for me.  It’s the month I was born.  In more recent years this has not been a time of celebration as much as a time of reflection on growth, possibilities, and life.  It seems like the perfect time to create a Happiness Project guided by the book of the same name by Getchen Rubin. 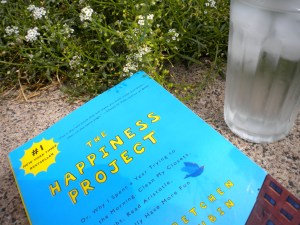 Every project needs a blueprint.  Plotting a project takes time.  You need to look at it from all angles, decide what should come first, and what is the best time for each step.  As it turns out, a Happiness Project is no different.

I used four things to generate my blueprint:

At some point, I ran headlong into the conflict between what makes me happy and what I think should make me happy.  For instance, all the experts say exercising will boost my energy, suppress appetite, and lift my mood.  They also tell me if I don’t like exercise, I just haven’t found the right one.  I like playing with the dogs, bicycling, gardening, and taking walks; none to the point of exhaustion.  I have more interesting things to do with my time.  Exercise makes me hungry, tired, and cranky.  It’s right up there with doing laundry.

This doesn’t mean that I’m not going to exercise.  Moderate exercise allows me to sleep better and keeps my joints mobile.  And doing laundry keeps me looking and smelling fresh.  Yet I’m never going to confuse either of them with happiness, and if I never had to do them again it would be okay with me!

By focusing on something I think should bring me happiness but doesn’t, I am neglecting something else that actually does.  It occurs to me that this is how a Happiness Project works.  I will be focusing on the things that make me happy.  If I tell you to notice the red things in the room, you will instantly see them, whereas a minute ago you did not realize they were there.  As I focus on the things that make me happy and the opportunities to create happiness, those things will appear in places they were once camouflaged.

I like finding myself one year older every September.  The temperatures are usually cooling and the humidity is dropping.  School busses once again follow their paths, the fruit is heavy on the trees, the garden swells with harvest.  It is a good time for me to focus on energizing.

Here will be my daily intentions:

After Bubba ate his muffin and sipped his morning Coke Zero™, I asked him (because you don’t ask Bubba anything before he’s had some sugar and caffeine), “What are your plans for today?”

Bubba:  I have a LOT to do.  I have to check on reservations for my buddy’s bachelor party, get snacks like pretzels and chips, I have to check in at the gym, and I have to buy a whole ton of stuff . . . (his voice drifted off, gazing, as if reading his to-do list from the ceiling)

Me:  Okay.  Because all I really have on my list is to go to the grocery store and do some self-reflection.

Bubba:  You gonna go look in the mirror?

I don’t think I’ve really spelled out what a compulsive-obsessive list-maker I am.  I have as many lists as ways of accumulating them.  I use Springpad, Out Of Milk, Mindjet Maps, FlyLady, ColorNote, DroidDia, Netflix, Habit Goal Monitor, Pinterest and good old fashioned pen to paper.  This doesn’t even scratch the surface of the different lists and gadgets I have for listing out ways to eat and exercise.

All my life I’ve looked for formulas to life.  Everyone has one to sell, read, download or listen to, and if I could only find the one that works for me, life would be simple, right?

An article titled The art of list-making by BBC News mentions compulsive list-making.  I couldn’t have written it better myself, and so to truly understand my thought process, you must read the following:

First there is the gentle thrill of anticipation as I contemplate the pristine paper in front of me. I may not yet have a subject for my list, but just the thought of one gives me a sense of purpose.

Second there is the light-headed buzz that gradually develops into bliss, euphoria and an all-consuming calm.

Third comes the extraordinary sense of satisfaction from having created a rigid timetable of impossible tasks that has taken a disproportionate amount of time and thought.

It doesn’t matter that I will never look at it again.

Psychologists say that obsessive compulsive list makers (I guess that includes me) are trying to create an illusion of control in otherwise chaotic lives.

My compulsion has now been spoken aloud.  It does get worse at times of hormonal mutiny.  Following or falling off of my plans can also coincide with hormonal uprising.  With this in mind, you must now know that I am reading The Happiness Project by Gretchen Rubin.  This is list-making on a grand scale.  Caution must be exerted along the way.

It is The Happiness Project that inspired my Best Practices page, which is indeed a list I have collected through life experience.  Gretchen calls them Commandments and Secrets to Adulthood.  Not being a religious fan, commandments sounded too . . well . . religious, but also restrictive.  Once I renamed it Best Practices, I had a hard time sorting the secrets to adulthood from the best practices, so I joined them into one list.  Gretchen is very reassuring about making this project your own and to be honest, I need less lists not more.

So far, so good.  My Best Practices list is a list of things I already, for the most part, do.  It is good to have a list of actions to remind myself to keep doing, celebrate that I am the kind of person who behaves this way, and (because I am a good mother) nag my kids to do.

There will be more posts about my journey, but as you know (or will know if you just tuned in), I meander through life.  Since my blog follows me wherever I go, so too will you, my reader.  There is much of life to explore!  More lists to make, more food to taste, more vegetables to grow, more sorry excuses about which to rant!  So this isn’t going a straight line from beginning to the end of this book.

I subscribed to Gretchen’s newsletter, “liked” her on Facebook, and followed her on Twitter.  I downloaded the e-book, then forgot I did, so I bought it as an audio-book.  And as I listened, I really wished I had a hard copy so I could highlight various excerpts, so . . . you guessed it . . . I ordered a hard copy.  So much for my How-To-Be-A-Minimalist list.