. . . Quite recently, I was enjoying a ramble around an oblong lake not far from home.  It was a grey lake, reflecting the grey sky of autumn on one of the last days before winter clasps its icy grip.  It was not the type of day one would expect to see delightful artifacts, and yet I could not deny my eyes. 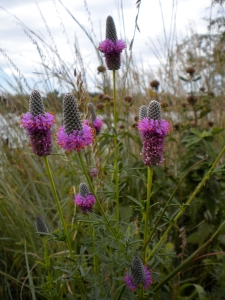 There, among the grasses were ruffled lavender petticoats, garnished at the hems with beads of gold.  How amusing was this to me, that I nearly forgot to snap a photograph before continuing my recreation.  I puzzled over why several lavender petticoats would be hanging in a group amongst the grasses, but relinquished my query to that of the elfin customs of which I would never be privy.

Along the way, there were birds that called, and rustlings in the leaves and other things that caught my ear.  Inasmuch as I would love to have heard a whisper or a miniature giggle, I did not. 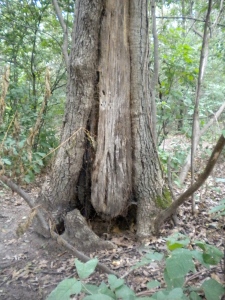 What I heard was a long, low groaning sigh.  My feet solidified in place.  My own beating heart pummeled against my chest.  I turned ever so slowly and thought perhaps I had distinguished a movement, a shifting, yet perhaps it was altogether nothing.  Crooking my head to the left, and then slowly to the right, in disbelief I realized a face, interrupted mid-yawn.  The old oak had a long nose and a toothless grin.  I had, undoubtedly surprised him the moment he surprised me.  I came to realize the woodlands were filled with all sizes of creatures, both hidden and obvious, if only to the eager eye.

There are other indications of the magical world, if you are open to receiving them; a washbasin of rainwater for a tiny sprite, made from a brilliantly colored fungus; an opening in the side of a tree for looking out of, or escaping into. 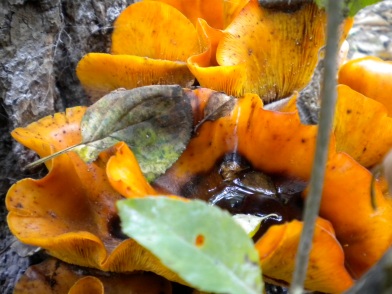 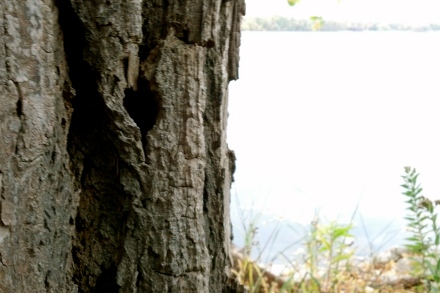 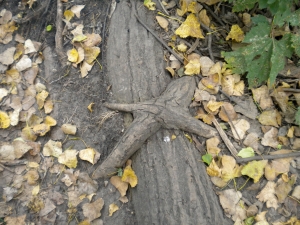 One of my favorite finds was a landmark beneath my feet, in the middle of the path.  A marker.  A monument.  Perhaps of a great victory of battle.  Or a memorial of a considerable tragedy.  Perhaps a beacon, a proclamation of love won or lost.

As I draw to the close of my admission, believe or don’t believe, but know this about your narrator.  Of that which I have not seen nor heard with my own senses, there is little in which I regard as true.  Reader, I council you to keep a keen awareness of your faculties at all times.  This is, of course, wise advice for those interested in safekeeping one’s self from trauma.  It is, however, a requirement for those of us who wish to keep our heart open to the possibilities that surround us all. 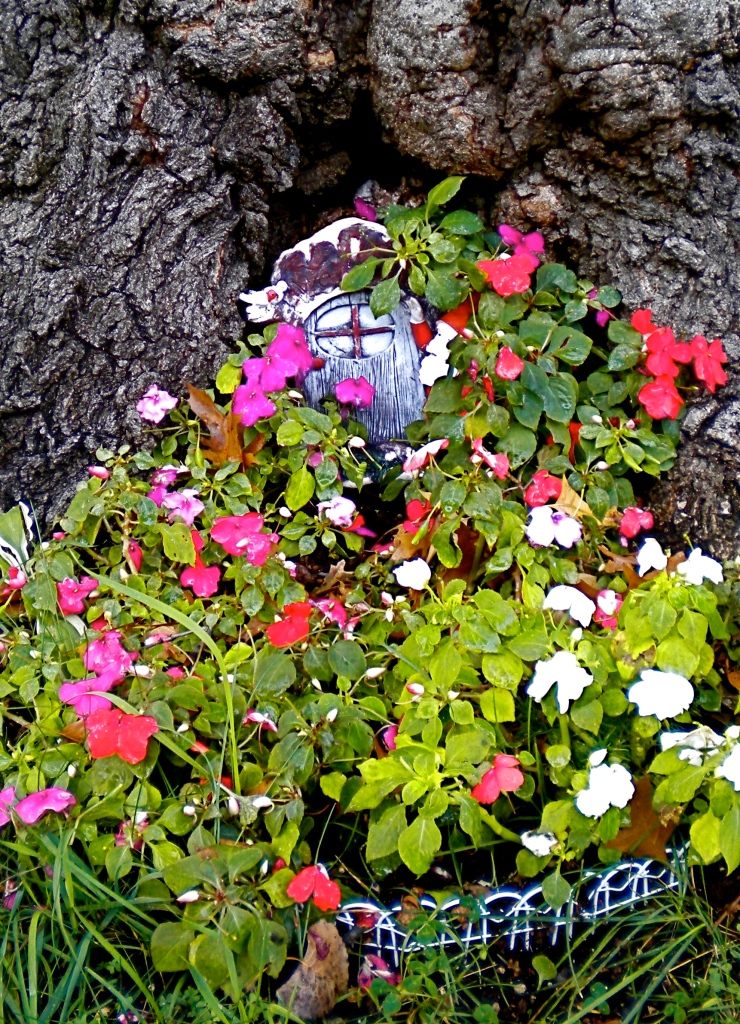 Pixies exist.  I will admit that I, too, was skeptical.  Yet as sure as the sun shines and winds blow, pixies, along with sprites, elves, gnomes and other wee folk, inhabit the earth.  I present to you, here, the irrefutable evidence of such beings.  If you can tell me, in the end, you don’t believe, I beseech of you to close the page; seek out your imagination, and resurrect what remains of it . . .

Once upon an uneventful afternoon, in the most dreary time of year, after autumn undresses its fiery gown and lays it wrinkled on the ground, I found myself on a woodland walk.  My furry companions far ahead of me, I stepped along the well-worn trail until I heard something to the right of me.  The sound, being of a scurrying type and not an alarming type, did not beckon me to stop.  Rather there was something I saw that turned my head not once, but twice, and brought me to a standstill. 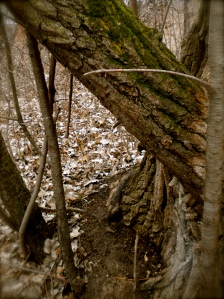 It wasn’t something one would see if one hadn’t been looking, but having been coaxed by a rustling through the crisp leafy floor of the woods, I saw it.  Exactly what I saw was not intelligible upon first glance, but having taken the second, became immediately clear.  There, beneath and around the base of a nearby tree was a well-worn path much like the one I trod.  Yet this was a miniature path, fit for tiny feet, tucked under a branch, and leading seemingly nowhere.

Had this event occurred only in my deepest imagination, I might not have taken out my camera and snapped a photo.  I later scoured the pixels for a camouflaged face, or the unobscured hem of a miniature coat, to no avail.  There remained only the trail leading nowhere around a tree like any other. 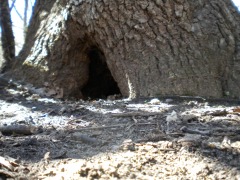 Having had my curiosity piqued, on subsequent meanderings through the woods, I became much more aware of irregularities within the familiar landscape.  There were, at the base of many a tree, openings.  One might imagine a passageway, an access to underground tunnels, or a series of elevations within the tree.  One might, indeed, imagine any number of things beyond the deep, dark opening in the bottom of any ordinary tree.  And I, possessing a healthy imagination, conjured up a number of stories, each more fascinating than the one before . . .