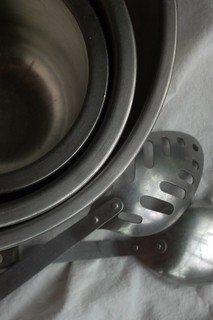 It is called the heart of the home.  The kitchen is where, no matter how big or small, everyone gathers at the same time.  The dinner table of my childhood was in the kitchen, nestled tightly between the basement and back doors, and the pocket-door to the dining room.  The traffic pattern rivaled Grand Central Station, yet five of us sat comfortably, served from the white gas range which stood against the wall.

The floor that was there before it was upgraded to linoleum was speckled, as were the counters.  The incandescent light was small, and gave off a golden glow amplified by the cheery yellow walls.  Frilly curtains ruffled from the window over the sink.

The kitchen is where Dad got me to eat canned peas by telling me they taste better when squished with the back of my fork, and fresh tomatoes by sprinkling them with sugar.  He put a scoop of ice cream on cantaloupe, and he dolloped ketchup on his beef stew.  Most of his meals he ate with a slice of bread slathered with butter and strawberry jam.  I can still summon his spirit with a slice of that goodness. 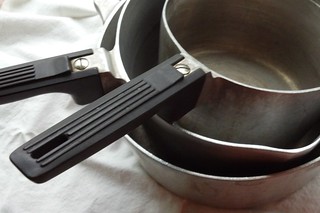 The refrigerator has changed remarkably since I was a girl.  Not only has it gotten bigger with more compartments and easier to maintain, it contains a plethora of condiments, seasons, sauces and flavors that never existed in my childhood fridge.  We had ketchup, mustard, Miracle Whip, Worcestershire sauce, soy sauce, Hershey’s syrup, and possibly a leftover jar of pickles or olives from the last holiday dinner.  There was no salsa, chili paste, Szechwan sauce, hot peppers, tabouli, pesto, hummus or even minced garlic for that matter.  Back then there was meat and there were vegetables.  If you were lucky, there was Jell-O for dessert.

Cooking and eating were not the only reasons we spent time in the kitchen.  My mother and grandmother ironed things like sheets, handkerchiefs and underwear in there, discussing the best practice for dampening the wrinkles, or starching the work shirts.  A child-sized iron and board sat in the corner, for pretending.  It really plugged in and warmed a little to the touch.

Haircuts were given to my reluctant teen brothers, who would rather have donned long sweeping styles like that of the Beatles.  Draped in towels or old sheets, the boys argued, whined and complained while the buzzers and Dad’s special hair-cutting scissors removed lengths of hair to the kitchen floor. 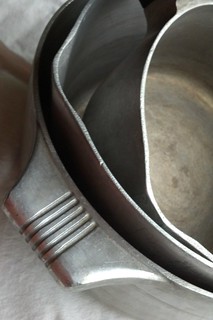 We shared news in the kitchen.  My brother leaving for the Marines, another getting engaged and later having children were all disclosed at the dinner table.  Accounts from the day and headlines from the paper were discussed over cups of milk or plates of spaghetti.

The kitchen was a classroom.  This is where my mother learned to cook from my father, who learned what he knew from his mother.  The grandmother I never knew was one heck of a cook, whose lemon meringue pies cannot be matched to this day, I am told.

My mother, ever the student, one time subscribed to a cooking class encyclopedia.  She pledged to take it one class at a time until she was a master at the art of French cooking.   She cooked for hours upon hours, and did finally serve a delectable coq au vin in our formal dining room by candlelight, but not after scouring the city for chicken feet, or beaks or some such part.  We laughed all through dinner about how she had finally given up and used chicken wings.  It may have been the only recipe she ever used from that expensive volume of books. 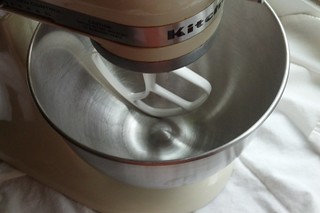 Of course, I learned my love of food, both eating and preparing, in that kitchen.  There were early mornings watching Dad prepare the Thanksgiving turkey.  Late nights helping Mom with Christmas cookies.  Favorite casseroles cut from the newspaper, salads created from the side of a pasta box.  The heart of the home.  The home of my heart.

After my mother’s death, the things from my childhood kitchen were laid out, dollars and cents scribbled on tags hurriedly attached on the handles.  I will leave this full story for another time, but I was told, “These are just things.  They can’t bring her back.”  The words were meant to comfort me; to dry the tears rolling down my face.  At the end of the day, I did end up bringing home the things that meant the most to me.  And do you know what?  It does bring her back.  Just a little bit.

The photos in this post are some of the things I grew up with in my mother’s kitchen and are now a part of my daily life.

This may be done the day before baking and stored in the refrigerator.