What did you want to be when you grew up?  I wanted to be a flight attendant, a truck driver, a veterinarian and a teacher.  None of those things ever came to fruition, but I have never stopped wondering what I could be if I ever grew up.

Sometimes I imagine selling everything to move out to the country and live on a farm. I’d want to have cows and chickens and grow organic food and sell it to people who eat things like wheat grass and chia seeds.  I’d have a pasture and a horse, and a big enough yard that Sabbie could run for Frisbees without ripping up our small suburban lawn.  The nearest house would be a half mile away, and I’d call them neighbors.

When I told Bubba about this he called me a hippie.

Me:  I suppose I would have to stop shaving my legs.
Bubba:  I reckon.
Me:  Do you think I could keep shaving my pits, or would I have to let that go too?
Bubba:  I think that goes along with the gig.

There is always something to discourage me from my big ideas.  You can call me a pessimist. I say I’m a realist. A realist with smoothly shaven legs and pits. 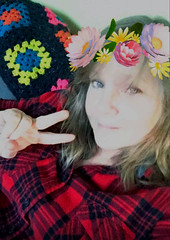 As promised, I’m letting you know that I found the picture of me in my little pixie cut. So homely, I’m cute. And after all these years, I have to say it’s true. 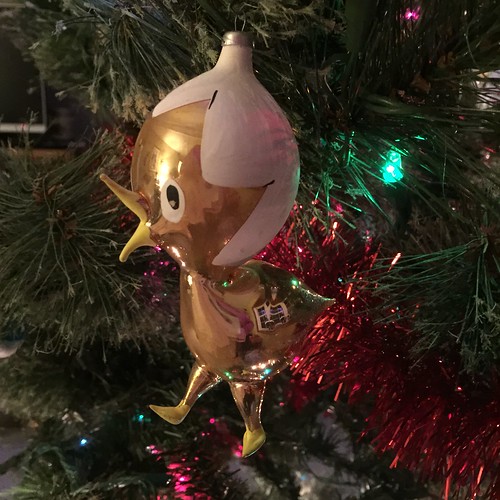 Little ornament, I sometimes think of you on the warmest days of summer, waiting silently and patient in your storage box of red. You quietly guard so many memories beneath your glassy wings.

The day we brought you home, my mom and me, we found you hanging from a needled branch on a department store christmas tree.  The music piped, the lights twinkled, and we saw you dangling there.  We laughed at your tiny feet, your silly eyes, and eggshell hat.  My mother said, “It looks so fragile, I don’t suppose it will last a year.  But it’s so silly I think we need to get it, don’t you?”  I emphatically agreed as the saleswoman wrapped each of the ornaments we had chosen in layers of tissue and placed them in a bag.

Every year as you emerged from your ball of crumpled paper, Mom would exclaim with delight that you had made it one more year. And every year so far, you have.  Do you remember the year we brought you up to the cabin in Wisconsin?  You swayed nervously on the feeble bough of a tree so small we tied it to the window to keep it standing.

You see, you never know when you’ll open a box and the thing you find most precious is broken beyond repair.  And everything it ever was will remain only in the heart of those who love it.

Thank you for reminding me, especially at this time of year, that life is fragile and fleeting and to cherish my loved ones with all my heart while they are within the reach of my loving arms.

We are now only one turkey dinner away from being launched into the official gift-giving season.  I know that sentence made you cringe. There’s all kinds of bad juju wrapped up in there.  It brings to mind long lines, empty wallets, and whiny kids waiting to sit on a strange man’s lap. Tell me, when else do we let that happen?

And there is the added stress of finding that one gift that will change someone’s life forever. I received one of those gifts the last year of my mother’s life. It was the hardest gift I’ve ever had to receive.

It was a pair theater tickets to the musical The King and I.  She loved the theater.  All four of my children had attended by the time they were six. She made sure of that.  We have a wonderful Children’s Theater in Minneapolis, and the productions are amazing.

The catch was that it was a pair of tickets for the both of us. This would, under normal circumstances, have issued no grief on either of our parts. But these were not normal circumstances. Since my mom’s stroke six months earlier, I had only taken her out once or twice.

At the risk of sounding shallow or selfish, I tell you I was afraid.  My mom had always taken me out to the theater. I followed her leads, and let her help me.  This was going to be very different. And it went beyond what I wanted to do or any fears I might have had. My mom wanted to go to the theater one more time. And she wanted to go with me.

When I showed up at her house, her live-in caregiver greeted me at the door.  Mom was wearing her prettiest black dress, though it hung lake drapery on her thin frame. She wore makeup and held a small black bag, the tickets tucked securely within.

I pulled up to the front of the theater, as she instructed, parking in front of the valet.  She pressed some bills in my hand, telling me to give them to him as a tip. The valet helped me unload and unfold the wheelchair. Leaning down, I wrapped my arms under hers, and around her back. I lifted her to her feet, supporting her while she shuffled to position herself in front of the chair.  The valet held the chair steady and, once seated, asked her if everything was okay. She nodded, and he grinned wide as I handed him the money she had provided.

I was walking a tightrope, balancing between helping my feeble mother and letting her help me, as it had always been — offering some small piece of normalcy in the otherwise implausible life she now lived. And yet, it was no act. This was her world, not mine. I needed her every bit as much as she needed me.

I followed her crooked finger, turning this way or that, past elegant ladies and handsome men. We took the elevator to an usher who directed us to one of the seats next to a bit of open floor where we parked and set the brake. It wasn’t long before the lights dimmed and I allowed the tears to swell in my eyes.

I was ashamed at my nervousness and astonished at my pride. Proud for facing my fear, for having her want to spend this precious time with me, and proud, as always, to be seen with her.

I’m not sure how she did it, perhaps by sheer will, but she made it to intermission without vomitting. You see, this is what really killed her. She kept very little food or drink down. Her voice was weak and coarse from the irritation of it. And she was slowly wasting away. But the fact is that the first half of the show was quite uneventful, aside from the magnificent story unfolding on stage.

We pushed out to the lobby, each ordering a glass of wine against my better judgement.  We exchanged small talk, and I made sure she was comfortable. Back in my seat, the alcohol calmed me and made me sleepy.

The man next to me leaned over me to ask my mother how she was enjoying the play. I will forever be in this nameless man’s debt. Perhaps he sensed my trepidation. Maybe he just wanted to make an old woman feel seen and heard. But his conversation brought me relief and I will always remember him.

The lights dimmed again, and the actors took the stage. I scarcely remember the production.  Each nerve in my spine stood rigid and ready, like taking a newborn home for the first night. I waited until it came. The retching. The straining. I held a bag with one hand while soothing her back with the other.  While I measured the distance to the door and which was the worst distraction to the audience, it stopped. I handed her tissues, and it was over, and the musical concluded in one grand finale.

Before we left the theater, we found a wheelchair-accessible restroom. I wheeled the chair in, locked it in place, and asked what she needed next. Mom assured me she would be fine, but that she would leave the door unlocked, “just in case.”  I paced outside like an expectant father, waiting and listening for what seemed too long a time. When at last she emerged smiling, she suggested we find dessert.

When the evening concluded, I left her in the capable hands of her caregiver. We kissed and hugged and exchanged thank yous. I imagine she slept well that night and awoke the next morning with a happy heart.

As for me, I haven’t been to the theater since, and when I do it will never be the same.  I am ashamed to admit the fear I felt. I hope I was able to hide it.  Yet she was my mother, and mothers have a way of knowing.

I’m not sure who received the greater gift that night, the giver or the recipient. And I can’t tell you whether the gift I received was the honor of having been chosen to receive it, ot the strength I found in carrying it out.  But I can tell you its greatness lies within the mystery.

When you and your colleague both show up to a work event wearing plaid pants. #twinsies
When did this happen? ♥️ My heart is full.
Had a really great time at @ejagz baby shower. @aprmaejun did a great job! @elkriverfloral provided these beautiful bouquets @manitoueventcenter was a great venue! #itsaboy #comingsoon #cantwait
Things I'll put up with from my grand dog that I won't from my own dogs.... #dogsofinstagram #dogslife #granddog
I won't turn these off until almost Valentine's day. It's the only thing that gets me through winter. #lights #winterlights #sorrynotsorry
Ready for #gqmagazine