We had an unexpected visitor last night. It was one of those days where you can’t wait to get into your p.j.s and just zone out in front of the television. Wait . . . that’s pretty much every night around here.

Well, it had been a long day — early to rise and productive. So I threw on a nightshirt, and okay . . . don’t judge me, but I was naked as a jaybird under that thing.

I know. You’ll never be the same. Sorry.

We turned off the tube at about 9:00 p.m. Bubba got up to close and lock the front door. He turned on the outside front light, and was startled by a brown face in the dark. When I heard his reaction, I joined him at the door.

Now, I wish I had a picture, because he was so handsome. He was young and well-built, and seemed very friendly. We opened the door to see what he wanted, and he greeted us enthusiastically. Bubba and I both glanced up and down the street to see if he was alone, to which we surmised he was.

In the dark, we saw a metal tag hanging from his blue collar. Bubba retrieved my phone from inside, and I tried to read the fine print while he wriggled and nuzzled his way into my heart. When I couldn’t make out the number, Bubba edged his way out the door, keeping one dog out and two in. We traded places, him with the collar, me taking the phone. Bubba’s eyes are younger than mine. Most of him is.

The phone number led to a veterinarian office, after business hours with no answer. We stood still and listened for someone calling in the distance, “Fiiiiiidooooo……” We heard nothing but the usual clatter from houses, traffic on the main road, and dogs barking to be let in one last time before bed. The street, littered with neighbor’s cars and trucks, forced those passing by to slow to a cautious speed. Each time, we hoped they would stop to thank us for holding their pet for them. Each time the cars continued up the hill.

We took turns holding the dog and running into the house. I went in to get a leash, a jacket, and tennis shoes to throw on with my nightshirt. I shut the windows so the dogs’ barking wouldn’t bother the neighbors, and to keep them from hearing our new friend so clearly. Bubba ran in to get shoes. Still, the cars continued up the hill, and no voices called for a lost dog to come home.

We rejected the option to keep him until the morning, either inside or out. We even thought about letting him go, thinking he might find his way back home. But it was obvious there was only one safe choice for us, our dog-family, and this beautiful big, brown pit bull. 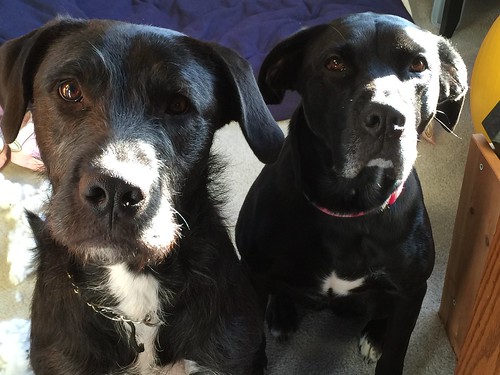 While Bubba went in to calm the hounds, I made a call to animal control. She said they would send someone right over. In the meantime, I hoped the owner would come along and save this guy a trip to the pound. He was a strong animal, jerking me this way and that toward the sounds in the night. It was all I could do to keep him out of my emerging perennials.

It was while I was on the phone with a helpful friend (who is somewhat of a dog-angel by nature), getting her take on things, that a city police SUV pulled up. My call ended as this massive beast decided I wasn’t greeting them with the urgency they deserved.

I leaned back on the leash, and was pulled one step at a time, each one faster than the last. By the time the two of us reached the middle of the yard, I had given in to a run.

Please note:  I do not run. Not only are there just too many parts of me that bounce, jiggle, and swing, but my knees are no longer up for the task. Nor is my bladder.

Another pace or two, and my descent to the street had become less than a run and more like what I can only describe as a launch, my wrist wrapped firmly in the handle of the leash. This stunt, which I can remember micro-second by micro-second, happened in the wag of a tail. At once I realized the only thing that was going to save me from a face-plant on the asphalt was if I could hit the police vehicle first.

With my eyes on the goal — the word POLICE in shiny gold letters against the black front fender of the SUV — I put my hands out just as I realized this was not going to end well. My knee hit the pavement at the same time my face struck the “L.” Bullseye. The phone I had hung up seconds ago bounced across the hood of the car.

The panic of ensuring my nightshirt was still covering my undercarriage dwarfed any pain I might have felt. I may or may not have wet myself . . . Just sayin’. One cop took the leash from me while at the same time asking, “Are you okay, Ma’am?” The driver did a combat roll over the hood — okay, he didn’t. But he was at my side in a flash, wanting to reach out to me, but needing to assess the situation before moving the victim.

When he also asked if I was okay, I told him I would be as soon as he helped me up. Giggling, with a bruised pride, I answered his questions — name, address, phone, and how it was I had the dog. They said the decision to call them was the right choice. We all hoped he had a chip, and agreed he was a gorgeous animal. When he asked again if I was okay, I told him I hoped his car was okay, peering in the dark to look for a dent. I wanted nothing more than to tuck my tail and retreat into my house. When eventually they dismissed me, I shuffled off without looking back.

Inside, Bubba came to the door in amazement. “Did they come get him already?” It took me several tries to get the story out between my giggle-fits. Once showered and back in fresh night-clothes, I took inventory of my injuries. One twisted ankle, one bruised and swollen knee, and a scuffed thigh. Bubba brought me a couple of ice packs and I swallowed some pain reliever. He kept repeating, “But I was coming right back out! I should have been out there!” But then I’d have nothing to write about.

I can’t help wondering if I’m the butt of some awfully good police stories today. No pun intended.

Embed from Getty Images
Not our friend, but as close a picture as I could find. Please spay and neuter your animals. Pit Bulls are not for everyone. When choosing a pet, find one that fits your lifestyle . . . and strength.

7 thoughts on “Upon Opening the Door to a Stranger”