I have a love-hate relationship with lawns.  My toes like to curl deep in a green sponge of the stuff, but there’s a snake lurking in the grass.

Lawns became popular in northern Europe during the Middle Ages.  So did witch-burning and blood-letting.  The kind of lawn most people envy today require several supplements, typically in the form of chemicals.

The suffix -cide is added to words to indicate “killing,” or “to kill”, while the suffix -izer is added to indicate “render,” or “to render.”  The words fungicide, herbicide, pesticide and fertilizer suggest we are killing everything off but the grass, and then trying to render it fertile.

It may be time for a change, eh?

Most of us see the yard as an extension of our house.  We ogle pictures of carpet-like green expanses, and click on pictures of outdoor seating areas free of pollen, seeds, bird poop and rain.

The truth is, our yard is part of nature.  The reason we need all those chemicals is because we are forcing it to be something it was never meant to be.  The out of doors, left to its own devices is biodiverse.  The formal lawn is a monoculture.  Mono.  As in one plant.  Grass.  There are very few examples of monoculture in nature.  Most are purely manmade, such as in agriculture.  But your lawn isn’t even being grown for food.  You might as well pour concrete on the whole thing and paint it green.

The weeds in my yard are a symbol of life.  They are nature trying to regain balance.  The weeds import biodiversity. 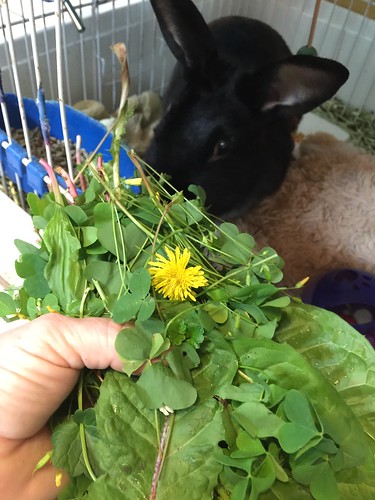 In the early morning I pad out to the yard in my pajamas, frequently barefoot.  I’m foraging for my grand-rabbit’s breakfast.

I acquired the domestic rabbit when my daughter rescued it from her uncle’s farm.  Little more than a baby, someone had apparently set it “free” when they decided they no longer wanted it.  She is a full-grown rabbit now, and quite at home living in my kitchen.  However, lest anyone (my daughter) forget this is not a pet I chose, but one that was bestowed upon me, I will forever refer to her as my grand-rabbit.  Her given name is Mandi, but I call her Rabbit and occasionally just Bun.  But I digress . . .

On my way in, I will often stop by the salad garden to pick the greens for my own lunch .  Better yet, I might make a breakfast salad with green onions, crumbled bacon, homemade croutons, and a poached egg on top.  Drizzled with a maple vinaigrette, it is the best way to jump-start a five-star day! 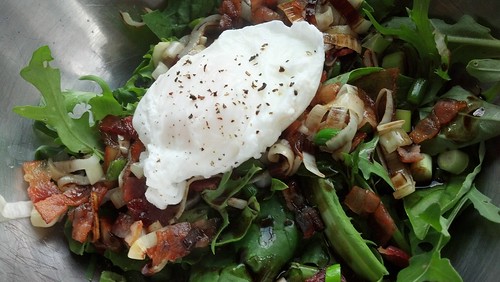 On one particular morning this last week, I was adding dandelion blossoms to Bun’s breakfast.  She gobbles them up like candy.  I left two of them intact, as they each hosted about three tiny bees, bobbing their abdomen atop the yellow flowers.  It reminded me that I share this yard — gladly, too.

Bun dines on the leaves and flowers of dandelion, clover, plantain, and creeping charlie.  Yes, I have creeping charlie.  Sounding more like a security issue than a weed, creeping charlie is the scourge of the lawn.  It can choke out small plants, and as its name implies, creeps sure-footedly across expanses of ground.

My research revealed that it was once touted as a hearty ground cover.  Medicinally, it’s been used to cure everything from sciatica to asthma.  After is was brought to America, it was found to be very high in Vitamin C, and is now naturalized in almost every region.  Please note that not any of these are reasons to purposely plant the stuff, but if you just can’t shake that nasty case of scurvy, you may want to steep a cup of tea. 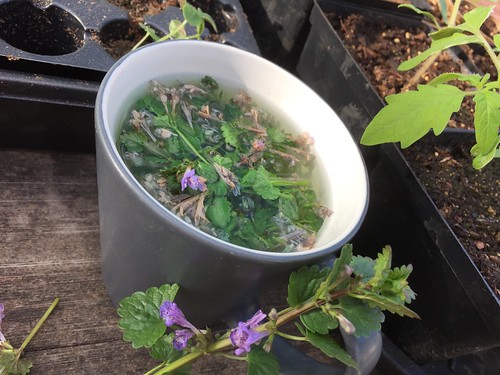 Well . . . you know I had to try it.  Several writings described creeping charlie tea as severely bitter.  I found it fairly pleasant, and not as bitter as some of the herbal teas in my cupboard.  *Maybe I just didn’t do it right.  I put it in a cup before adding boiling water, as one blog explained.  At any rate, I didn’t add the honey and lemon they all insisted I would need.

My point being that like people, most plants are not all bad.  Even the mint, chives and oregano I planted need to be carefully watched so as to to take over the garden.  And grass is not a bad thing, as long as we plant it responsibly where it can grow without added chemicals —  or water!  I can’t believe anyone is still using water on their grass.

The latest recommendation is that if possible, try to find a three to four foot stretch at the edge of your property that you can let go.  Let the branches fall and become home for worms.  Let the leaves drop and mulch the earth.  Let the weeds grow and the seeds germinate.  Let the pollinators buzz and the butterflies sip.  Let the squirrels dig.  Let the spiders spin.

Between the strip and your lawn, plant a transition of native plants and a deep mulch bed.  The benefit is less watering, less mowing, and your own little nature preserve right at home.

*There are all kinds of reasons I wouldn’t suggest you try this on my suggestion.  You would want to make sure you were indeed using the right herb.  You would want to wait after a first sip to make sure there is no reaction.  You want to know there are no toxins on anything you consume.  And you might want to make sure you have someone who can dial for emergency if necessary.  Please do your own research.  I am NO expert on the subject! 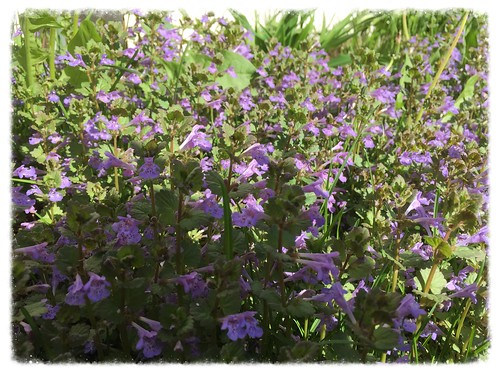 7 thoughts on “Lawns, witch-burning, and blood-letting may have run their course”