Yesterday the sun was shining, beckoning me, like most Minnesotans, out of my stuffy house into the fresh air.  There was enough of an early spring wind to keep my hat pulled low over my ears.  Yet, it was one of those days that reminds me spring is on its way.

As my car now doubles for a mobile office, I’d been hoping for a day such as this to give the old Neon a little spring cleaning.  Salt and sand brought in from boots and dog lined the carpet, which now looked less like the floor of a car, and more like a beach.  Grime collected in the crevices, and coffee (or was that ketchup?) spotted the seat.

Let’s face it, cars are designed by men.  Men sell them to men, with women leaning seductively against the grill.  If they ever placed a car ad with this guy waxing the front fender, I’d have to buy it.  But they haven’t figured that out yet.

So when I pull out the toothbrushes, rags, shop vac, and steam cleaner to scour the inside of my automobile, it’s likely I’ll have a few sexist remarks to mutter under my breath.

I hate cleaning, and I usually tackle what bothers me the most first.  That way, if I succumb to boredom, fatigue, frustration, or procrastination, at least I have made the biggest difference for my peace of mind.  In this case it was the floor, so I hauled out the shop vac.  Automobile carpeting is a pretty shallow nap.   Yet, it never ceases to amaze me how much dirt it can hold.  And not only does it hold a lot, it won’t let go.  I took those floor mats out, raised them high above my head, and brought them slapping down to the driveway time and again.  I kneeled on them to hold them in place while I vacuumed, little grains of sand bouncing around like it was some sort of disco rave.  And vacuumed.  And vacuumed. 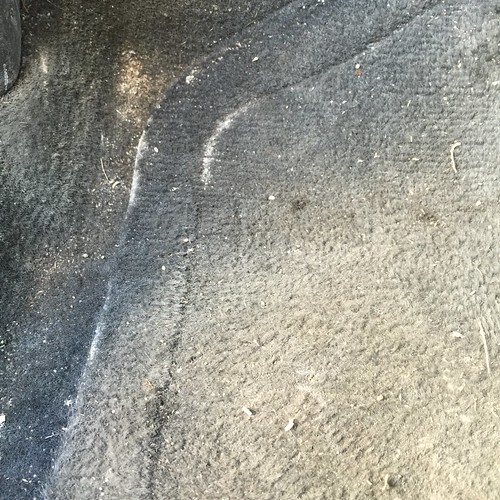 That was when I remembered.  It doesn’t matter how many times you slam them on the ground, beat them with a bat, or vacuum over the same spot.  There will always be a little sand rave party going on inside the nap of the floor mats.  You just have to get it good enough to look clean when you get in the car.

Then I started on the carpeted floor.  Remember when we all got carpeting in our houses?  It was so that we could get out of bed and not feel the cold hard floor beneath our toes.  Somebody tell me why we started carpeting our cars.  In my house, I can take off my shoes before dragging mud in on the carpet.  Should I dedicate a little floor mat for muddy shoes in my car?  Wouldn’t it make more sense if I could simply run a rag over a vinyl floor and be done?  A woman would have designed it that way.

No, the floor has its own little dance party going on as I vacuum it, and something more.  My long blonde hairs whip around when the windows are open and somehow fall out and weave themselves into the short nap.  The shop vac can suck at that thing all day, but it’s not coming out.  The rug acts like some sort of hair Velcro, which would be great if you wanted human hair carpeting.  I developed a system which involves using the vacuum to lift up the end of the hair.  I then pinch the hair against the vacuum hose while pulling back to draw the hair out of the carpeting.  Once the hair is out, I let go of the pinched end and the hair sucks up the tube.  Apparently a man would rather bitch about a woman’s hair falling out in his truck than design a vehicle with bare flooring.

Next I tackled the dash and center console.  Mostly it’s just dust that gets wiped off, but then there are those crevices.  The little cracks that give the car sophistication when it’s new, make great places for grime to collect as it’s used.  This is where I start losing patience and fingernails.  And believe me when I say I don’t have a lot of either to begin with.

If a woman had designed my car, she would have made the air vents removable.  They would snap out, be dishwasher safe, and snap back in just as easily.  The cup holders would do the same.  Those things are never coming clean.  I literally poured Windex in and let it soak before the coins came loose from the bottom.

The lid on my center console swings up and over to double as a cup holder for passengers in the back seat.  It houses a mini tissue dispenser as well.  It is the single best thing about my car right after the sunroof.  I’m convinced some dude was given an ultimatum when he designed it. 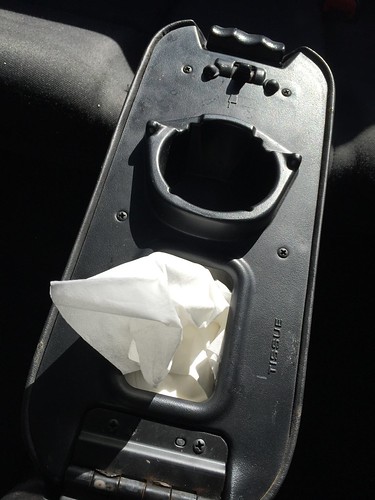 “Either design this lid with functionality, or we’re going to my mother’s for the Super Bowl.”

But he could have gone further, and possibly secured his place in bed indefinitely.  You see, the dog seems to think that console was made for her.  She stands on it, sleeps on it, and uses it to reach the sunroof in the summer.  I can see a lot of design options here.  My favorite would be a piece that flips up to make a wall, blocking her to the back seat where she belongs.  The second best option would be a dog-safe place to stand or lay that would keep her from flipping up into the front seat when I brake suddenly.    Of course, the best option would be a boyfriend who wouldn’t have botched my attempts to train her to stay off of it in the first place.

As I clean the paw prints off of the console lid, I am reminded of how it all comes down to flaws in the working of the male mind.

Finally, I drag my steam cleaner out to the driveway, and heat up the water tank.  The seats are thankfully black, and made of fabric which is neither too hot in summer nor too cold in winter.  The length to which I would go for a clean ride surprised Bubba.  He asked, “Next is my car?”

The liquid the steam cleaner pulled out of my seats was a putrid brown, like that of stale latte, becoming clearer the longer I worked.  Eventually, the results of my efforts pleased me.  I replaced the tools on shelves and in drawers.  Wiping my feet before entering the car, I drove it into the garage.  I filed the shredded edge of my nails to smooth nubs, and I took a wonderful hot shower.

Fully dressed for some errand running, we decided to take Bubba’s Pontiac because my seats were still damp.  As I slid my foot through the open car door, I saw it.  A banana peel lying next to an empty food container.  “Oh my God!  This is disgusting!”  . . . This coming from the woman who just drew sewage-colored liquid from her car cushions.

I plucked the banana from the rubber floor mat and hauled it to the trash.  After returning to settle myself into shotgun position, Bubba smiled at me.

6 thoughts on “If Women Designed Cars”