Have you heard of straw bale gardening?  Are you considering giving it a try?  This has been my great agricultural experiment of the summer!  I will definitely try it again next year even though it hasn’t been all I had hoped.  It all started with a couple of pictures I ran across on the the internet.

My curiosity was piqued.  Then at the 2012 Great Minnesota Get-Together, otherwise known as the State Fair, I notice that Joel Karsten was scheduled for a demonstration.  Joel is the author of Straw Bale Gardens.  Positioned just inside the shelter of the agricultural building, his talk included an interesting Power Point and a mini-bale visual aid.  I was hooked.  Within weeks I was shopping for bales. 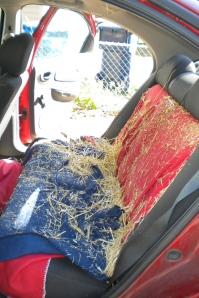 Getting your straw bales in the fall, I am told, gives you the best chance of finding what you need.  Having no previous desire to purchase a bale of straw left me with no sense of where to start.  So I threw a couple blankets in the back of my car, found the nearest garden supply, and procured as many as would fit it my Dodge Neon (four).  They were low-grade bales, but they seemed better than none, which is how many I was afraid of ending up with.

One month later, at an upscale gardening center, I bought a couple of the quality bales for which I had been hoping. This time I lined the back of my car with plastic, making cleanup much easier!

The six bales of straw were covered from the elements and stored for the planting while we waited for spring. 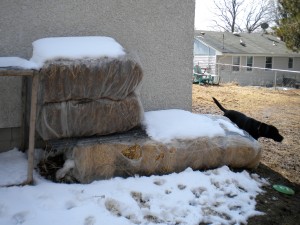 The seedlings were patient while we waited some more.

Yet, back in August, Joel had assured the audience that we could start conditioning the straw bales for planting weeks before the gardeners were considering nestling their seeds into the earth.  So I positioned the hay bales and started the conditioning process.

For ten days the bales receive a rigid schedule of fertilizer and water.  On the twelfth day the straw bales should be ready to plant.

Except on the sixth day, I realized I was not using water soluble fertilizer.  There was no turning back, so I let the bales rest for a couple days, found the correct fertilizer and started over on day one.  Again. 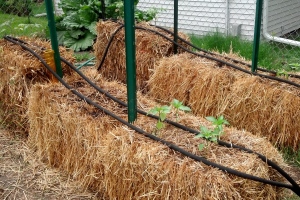 On May 20th, the telltale mushrooms appeared in one of the quality straw bales I had purchased from the upscale gardening center.  Mushrooms indicate the material is breaking down and becoming rich growing matter.

By June 11th, tomatoes growing in this area were the strongest plants in my little experimental garden.  In other areas, mushrooms and mold spores were occasionally showing up, yet this first area continued to show more plant growth.  Something went right in this straw bale, but what?

Everything else in the garden looked weak.  The transplants all looked yellow and weak.  The seeds were slow to germinate.  I watered with a fertilizer thinking the plants were just “hungry.”  Not much helped. 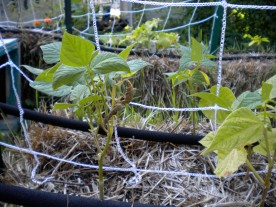 Then one day I went to work and left the soaker hose running.  It ran for eight hours straight.  Joel’s statement, “You really can’t overwater straw bale gardens” kept running through my head.  Indeed, nothing had been sitting in puddles of water, as they would have in a traditional garden. 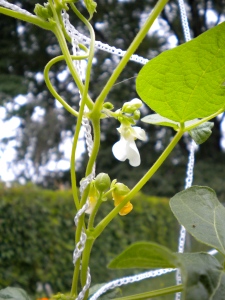 Two days later my pole bean put out a runner twice it’s height.  I wondered if the plants had just been thirsty. 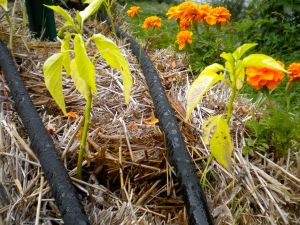 Today the marigolds that I bought on clearance and were near dead when I got them home, have perked up and are blooming; good evidence that the bales will support life! 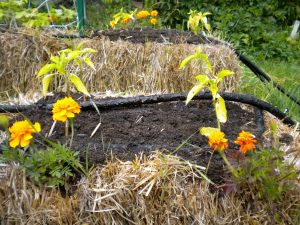 I decided to run dirt over the top of the two weakest bales, the preferred method for planting seeds.  I will be planting a late summer crop of leaf lettuces in one, and kale in the other.  I left the peppers alone, still wanting to see if the leaves will green up by the end of the growing season. 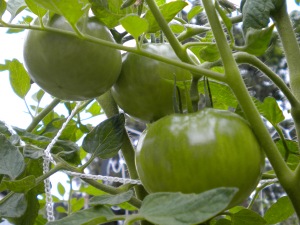 Between the odd weather we’ve had this year, and this being my first straw bale garden ever, I really have nothing to compare.  There will at least be a few tomatoes, provided mother nature lets them ripen. 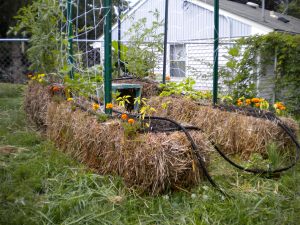 The advantages of this type of garden are clear.  There were almost no weeds other than the few straw seeds that germinated.  I have had no pests . . . including dogs.  In addition, the gardens are raised and easy on my back, which isn’t getting any younger!

“Our greatest weakness lies in giving up. The most certain way to succeed is always to try just one more time.”
–Thomas A. Edison

In other words, there is always next year . . .

30 thoughts on “Misadventures in Straw-Bale Gardening”