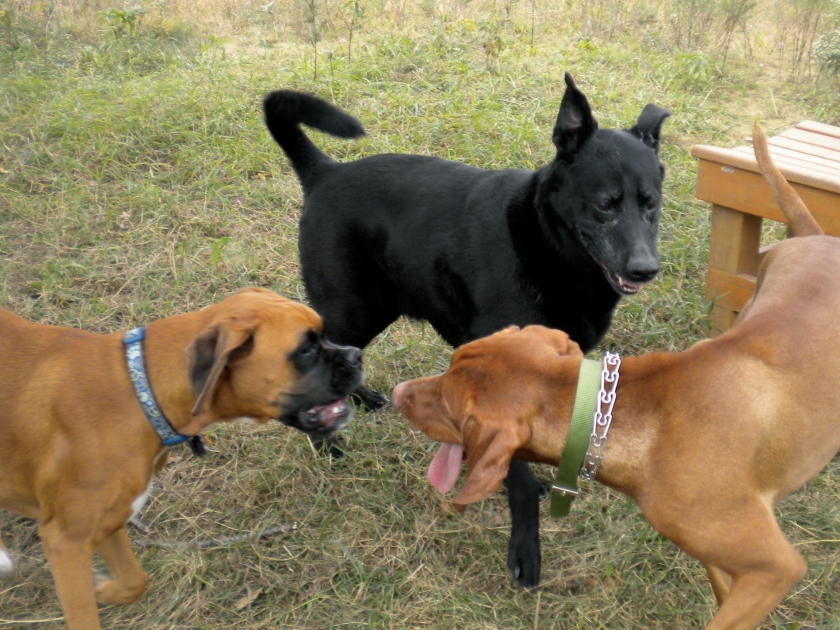 Just because dogs don’t speak words, doesn’t mean they are any less communicative.  There is an imperceptible language that happens between animals of all species.  Dogs have it.  And humans have it, if we pay attention.  It is that something that tells us, “I think I like you.”

Barney can greet other dogs for half an hour at the park, and then take off after one particular pooch, chasing as if he is half his age.  It’s that thing.  Chemistry?  Somehow you are suddenly aware that you want to know more about that person, or play with them in the grass!

We humans love it when our dogs get along.  We encourage them and laugh when they bow down to invite another to play.  We love it when their tails wag and they give each other positive signs of companionship.  But just like humans, canine creatures need negative forms of communication as well.  They need to be able to say “Dude, you’re all up in my grill,” and “Don’t sniff me there,” or “Hey, I’m not that kind of girl.”

For the most part people have learned to suppress the urge to growl and bite.  We teach our children young to “use your words.”  We think of our pets as little humans, and want them to play nice as well.  Dogs use the only “words” they can, and sometimes it scares us.  However, being the refined creatures they are, they usually walk away from confrontation, and no more than a raised lip or a low growl is needed.

Many humans come to the “rescue” of a dog that doesn’t need rescuing.  Imagine if you had someone doing all your talking for you.  “Oh, she doesn’t like red.  Do you have one in blue?”  “He likes paper, not plastic.”  Sooner or later, you would probably forget how to talk, look at that person every time someone walked up to you, and hide behind them if someone even looked like they wanted to greet you.  You wouldn’t even be able to flip someone off in traffic by yourself!

Barney loves the little dogs, and is especially mild mannered with them.  But sometimes his size is a little too intimidating for them.  Like most dogs, Barney isn’t interested in hanging around where he isn’t wanted.  He will happily find another butt to sniff if the little guy suggests he should.

Yet some humans don’t even give their dog a chance to sniff Barney.  They pick up their pup the minute they see big black Barney round the corner.  Whether they are afraid their dog will snap at Barney, or that Barney will play rough with him, they are reinforcing messages to their dog that he is unable to “use his words.”

Please know that I do possess a little common sense.  I would never recommend humans stand around and encourage dogs to fight.  That isn’t civilized for any species.  There are also those who bring a dog to the park that does not socialize well with other dogs.  It is always important to be aware of your own dog’s triggers and cues.  In my experience, moving away from an escalating situation and simply continuing our walk is the antidote.

Very rarely, there are those instances when, by some humanly imperceptible signal, one dog says to another “Are you looking at me?”  “You want a piece of me?”  And when push comes to shove, a dog has to stick up for what he believes in.  Embarrassed people must step in, break it up, and apologize.  Later, I will ask, “Did that dog give you the stink-eye?”  After all, I can understand a thing like that.

At the risk of inviting argument, I would suggest that we give the pups a chance to have a word on their own.  It may sound gruff or threatening to us, but to dogs it’s the only language they know, and it is actually a quite effective one that usually ends in a mutually peaceful agreement.

15 thoughts on “Use Your Woofs”