This was bound to happen.  Hang around me long enough and eventually I talk about food.  I made seitan (pronounced SAY-tahn) last weekend.  Prepared primarily from wheat flour, it really has little in common with bread.  Traditionally, the wheat dough is rinsed repeatedly until only the gluten is remaining.  It is a good source of protein and low in fat.  Like everything else, if you make it at home you have more control over what goes into it. 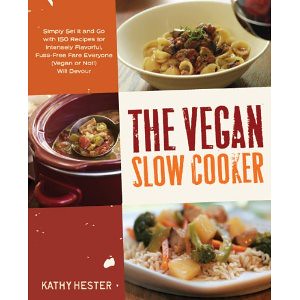 The recipe I used is from The Vegan Slow Cooker by Kathy Hester which calls for vital wheat gluten, and no rinsing is required.  The little dough patties are thrown into a broth and slow-cooked for a few hours.  Simple!  If you are looking for something similar, check out this post by Cathe’s Kitchen.

Because everyone seems to need a label these days, some call people like me flexitarians.  The seitan was made not out of a necessity for a meat alternative, but out of curiosity.  Generally speaking, I really don’t go for fake foods.  I never order chicken “nuggets.”  I don’t like “mock” crab.  I’m not keen on anything “I Can’t Believe It’s Not.”  When I go without meat for a meal it’s because I really prefer the taste of meatless menus.  In my opinion, stir fry doesn’t need meat.  Sandwiches or salads don’t need meat.  Chili doesn’t need meat.  Even burgers don’t need meat.  But if I want a real hamburger, I certainly will eat one.  And if I want crab, by golly I will eat crab and dunk it in real butter! 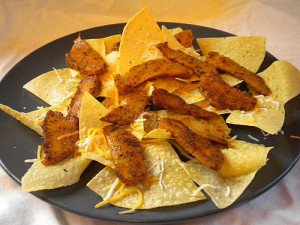 Last night I made nachos with my homemade “Chick’N Seitan.  I pulled out the little patty.  It looked eerily like a real cooked chicken breast.  I sliced it.  It sliced so much like a real chicken breast, that I almost forgot it wasn’t!

I sauteed the seitan with cayenne, cumin, chili powder and paprika and layered it with cheese on some really great tortilla chips.  All the other fixin’s were added, like peppers, onions, and jalapenos before melting the cheese in the microwave.  Lastly, I added shredded red lettuce leaves. 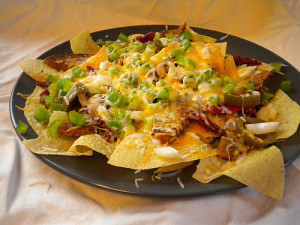 If I hadn’t been so hungry, I would have remembered to add black beans, corn and salsa.  It was all I could do to take these quick pictures before devouring it all!  I would have added tomatoes and avocados too, but I was fresh out.  I take my nachos seriously.

The verdict?  All in all, the nachos were tasty.  The seitan texture was curiously like chicken.  I still say nachos don’t need meat.  If I happen to want chicken nachos, I will probably make real chicken nachos in the future. 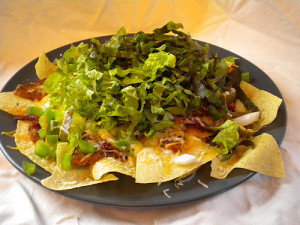 Seitan might just be one of those things I have to get used to.  Like tofu.  I used to think of tofu as a meat substitute, and I’ve told you how I feel about substitute food.  But now I think of tofu as . . . TOFU!  I even crave it.  Maybe someday I will say, “You know I could really go for a nice big juicy piece of seitan right now!”

2 thoughts on “Seitan. The Other Non-Meat.”